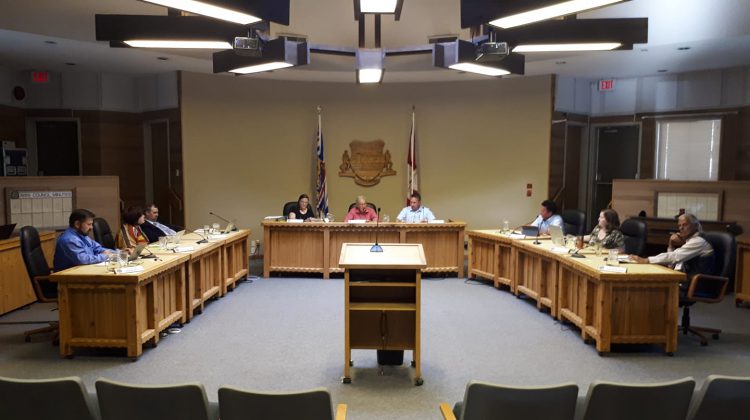 Just one meeting in on the 2020 budget and Williams Lake City Council is eyeing a zero percent tax increase.

Council is also seeking to support a reduction in capital spending to within a target of 20 percent of the annual operating/ capital budget for 2020, as well as a review of the City’s winter road maintenance policy, solid waste management, and recycling program.

That’s after a regular Council meeting Tuesday in which Council supported a finance committee report regarding goals of the 2020 budget.

Chair of the Public Works Committee Councillor Jason Ryll said while he agreed with moving in the direction that was outlined, he has to wonder if Council is at a point where they are overcommitting to something without having had a thorough discussion around it.

“When it comes to the budget deliberations at this point, I am in full support of having a review of different policies that we have in place and I think it’s going to be more flushed out when we get our capital projects list for 2020,” he told MyCaribooNow.

“I’m sure at that point we’re going to find some efficiencies but we’re just not there yet.”

Ryll said one is conducting a review of the winter road maintenance policy.

He said while he understands the environmental implications of using salt on our roads and that this might be an area where Council can recognize some potential cost savings, for Council to commit to reviewing it as a budgetary item is putting the cart before the horse.

Councillor Craig Smith said while he agreed that a review of the City’s road maintenance program is needed and that it’s too close to put anything in place for this coming winter, he was not big on supporting the original recommendation that Council support a reduction in capital spending to within 20% of the annual operating/capital budget for 2020.

“To really try to nail that 20 percent down might be a little restrictive on some of the departments, so I would say if we just had that word that makes it a little bit more workable,” Smith said before Council agreed to support the recommendation within ‘a target of’ 20 percent.

Chair of the Finance Committee Councillor Scott Nelson said there has been tremendous growth in Williams Lake in terms of new assessments and growth in the assessments over the last five years that has resulted in Council being able to utilize and increase the spending that they’ve had without having to increase taxes proportionally.

“We’ve talked about it for many years about basically taking a look at the huge menu of items that come before Council,” Nelson told MyCaribooNow.

“During many public discussions, there’s been public that say you need to refine your budget, you need to tone down a little bit in terms of what’s being presented, so we want to basically put in place an actual budget that is truly reflective of what’s on the public appetite. We can’t continue to put these huge massive capital wishlists into a budget that we simply know that we’re never going to do, so we’re trying to ensure that what we do do is put into place an actual budget that our community needs and desires.”

Ryll said he is not looking to try and create a steak and lobster budget.

“I think that’s a little extreme. I’m looking at trying to create a very realistic budget and if that means we have to revisit other items that are in these recommendations then that’s entirely our direction and our review to do be able to do. I’m just not looking to make commitments at this point,” he said.

“I’m just worried that we have one committee dictating what another committee is going to be doing without having a thorough discussion amongst the public works committee at least on how we’re going to be able to achieve these goals.”