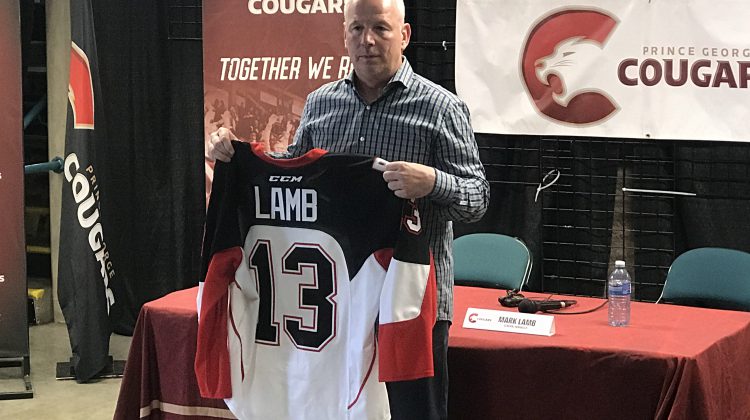 Mark Lamb has been announced as the 13th head coach in the history of the Prince George Cougars.

“It’s an unreal lifestyle, but that’s not exactly what I’m all about.”

Mark Lamb, moments after being announced as the 13th Head Coach in Prince George Cougars history, admitted to being offered an assistant coach position with the NHL’s Edmonton Oilers.

Turning down an opportunity to join his friend Dave Tippett in Edmonton and live the luscious lifestyle of the NHL was something Lamb pondered over, ultimately electing to remain in the Northern Capital and put forth an effort to finish what it was he came here to accomplish.

“I’ve been there. I’ve had some success in the NHL as a player and won a Stanley Cup. I’m not downgrading it at all, it’s an unbelievable league, but the situation here is pretty gratifying.”

Lamb stressed the importance of him fulfilling promises he made, both to the front office and the players, which ultimately played a significant role in the 54-year-old electing to remain in Prince George.

“The NHL lifestyle is unbelievable, as we all know. And it should be unbelievable because it’s the best league in the world. That’s where everybody wants to be. You’re flying on chartered jets, staying in nice hotels,” said Lamb. “But I’m from Cadillac, Saskatchewan — there’s not a lot of jets out there.”

“There were several qualified candidates who expressed interest in the position,” said John Pateman, President of EdgePRO Sports and Entertainment. “At the end of the day, when looking at Mark’s experience, reputation and vision for this team, as well as positive feedback from players and agents, we knew he was the best fit going forward.”

Lamb has an extensive hockey resume, which includes a Stanley Cup with the 1990 Edmonton Oilers, and spans over three decades as a player and coach. After a 15-year playing career, Lamb began his coaching career as an assistant coach with the Edmonton Oilers in 2001. He then moved to the Dallas Stars, where he then spent six years behind the bench as an assistant coach in the Lonestar State.

His introduction to the WHL coaching scene came in Swift Current, where he was named the general manager and head coach of the Broncos in 2009. He then got back into the professional ranks in 2016, joining the Tucson Roadrunners of the American Hockey League.

Now, despite being offered another crack at the NHL, Lamb has elected to settle and look at staying in Prince George long-term.

“I look forward to having a hands-on approach in building this team,” stated Lamb. “This is about continuing with the same vision we’ve laid out in the past year. The future is bright with this group.”

As the dust now settles on much speculation and rumours, Lamb is now able to look forward to next season in preparation of rebuilding the Cougars on-ice product following a season that saw them post a 19-41-5-3 record.

The Cougars also announced that Steven O’Rourke will not be returning to the bench for next season, resulting in a search for an associate coach to join Lamb behind the bench. The organization is expecting to finalize other members of the Hockey Operations Department in the coming weeks.