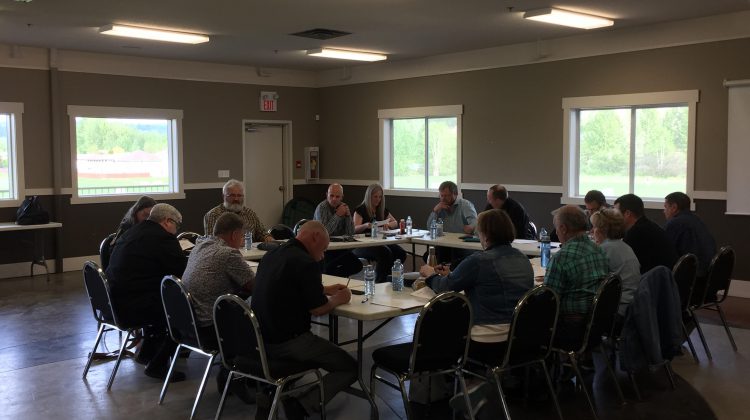 The two sides in “alternategate” met for the first time in four months last night as members of Quesnel City Council and the four Northern Cariboo Regional District Directors gathered at the Soccer complex.

The reason for the delay was it was the first time that all four elected CRD Directors could make a North Cariboo Joint Planning Committee meeting, and the City is refusing to meet with unelected alternates.

Jim Glassford, the CRD Director for Area I West Fraser/Nazko, says they have to get past this…

“There is a lot of work that needs to be done, it’s been backing up. Like I say out of the seven meetings we’ve only had three now. This is down to the point of ridiculous, the city is trying to dictate to the Cariboo Regional District Directors what they’re going to do. It’s a joint venture, it’s not a city venture, so the first thing they have to understand is it’s a joint venture and we’re not going to be pushed around.”

Glassford says he won’t have an empty chair at a meeting that he can’t make because then the people in his area won’t be represented.

Former Quesnel Mayor Mary Sjostrom, now the CRD representative for Area A Red Bluff/Quesnel South, was asked if this was personal to some extent…

“In my lifetime we never had any issues. In the 15 years (on Council) we probably had twice that two Northern Directors voted against something. And then obviously the lightning rod for the next term when the Mayor was elected was obviously, as I learned tonight, was me because I had the audacity to be an alternate when I had lost an election, but the last time I looked you can lose elections and continue to serve your community.”

Sjostrom also felt that Council, with three new members on it, was not fully informed prior to making it’s decision as CRD Directors are mandated to have an alternate under the Local Government Act.

For his part, Quesnel Mayor Bob Simpson says it is definitely not personal….

“This is not personal in any way, shape or form, it’s principled, and in fact the lion’s share of concern around this came from our three new Councillors who did not have the experience of the last four years where we worked very cooperatively and collaboratively with our Northern Directors.”

Simpson did say however, that he felt that there are some issues that the electorate needs to address…

“For example, as I raised tonight, how does a person who gets unelected in a general election by the voters then come in the back door by being an alternate and get the same decision-making rights just because they were appointed by someone else. I think the idea that if you did not run in an election after holding a seat, or you ran in an election and were defeated after holding a seat, there should at least be a one term timeout before you can come back in as an alternate.”

Simpson says concerns have also been raised that some alternates in the past had their own agendas in mind at meetings, as opposed to those of the people that they were supposed to be representing.

He also says that while they are aware that CRD Directors are mandated to have an alternate, that they are not used at all in the South Cariboo, and rarely in the Central Cariboo.

Despite all of that, City Council will re-visit it’s stance on the issue at tonight’s Council meeting.

Simpson says the CRD is committed to come up with a framework around how alternates will be used, and what the expectations of them will be moving forward.