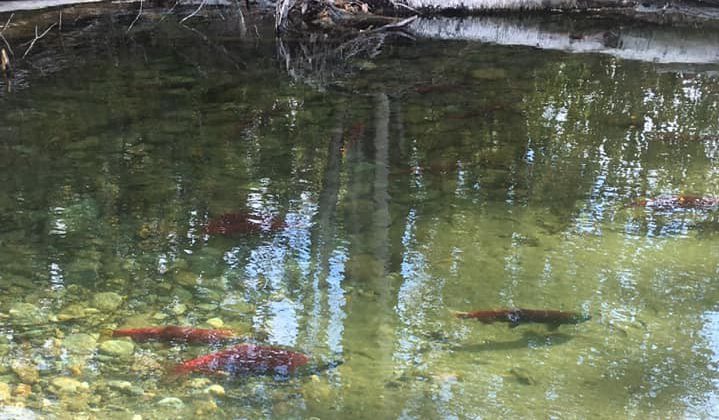 A volunteer community group and the Nazko First Nation is receiving a $200,000 grant over three years from the Pacific Salmon Foundation to restore salmon habitat damaged by the past two years of wildfires.

“As many people know many, many kilometers of creeks and streams were burnt through the wildfires through 2017 and 2018, and this money is the first amount of money that we’ve been able to secure that’s helping us access further funds to help to replant a lot of that area next to the streams and creeks which provides critical shade for the small juvenile salmon as well for the adult salmon when they come back.”

Bond said the planting also helps to decrease the amount of sediment that comes into the creek.

“Salmon particularly, the juvenile salmon, will suffocate if there’s too much sediment that happens at the wrong time in the creek, and as well it helps to provide food, leaf litter, and invertebrates for the salmon and cover for prey.”

Bond adds they were able to complete their first phase of the project within the last couple of months.

It consisted of collecting cottonwood, willow, and dogwood, and also winter planting.

The ongoing project is focusing on eight specific sites over an estimated area of 203 hectares.

“I don’t know if it’s ever going to be complete as in there is no way we could ever restore a hundred percent what was lost,” Bond said.

“Our hope is that we’re working with nature and we’re hoping that it will be ten years earlier that the streams will restore themselves.”

Important Chinook and Coho runs were seriously affected both with respect to their spawning grounds and rearing habitat by the Plateau Fire that burned over 521,000 hectares of land in the summer alone of 2017.

“The cumulative impacts of wildfires over the last two years on salmon habitat in the region have been significant,” said Dr. Brian Riddell, science advisor for Pacific Salmon Foundation.

“This is a complex challenge to deal with and it requires the kind of comprehensive group initiative being undertaken by the Baker Creek Enhancement Society and Nazko First Nation. The initiative will be a catalyst for similar efforts in other regions in order to mitigate the damage that has been done.”

(Editor’s Note: Listen to Tracy Bond, Executive Director of the Baker Creek Enhancement Society in the audio file below)