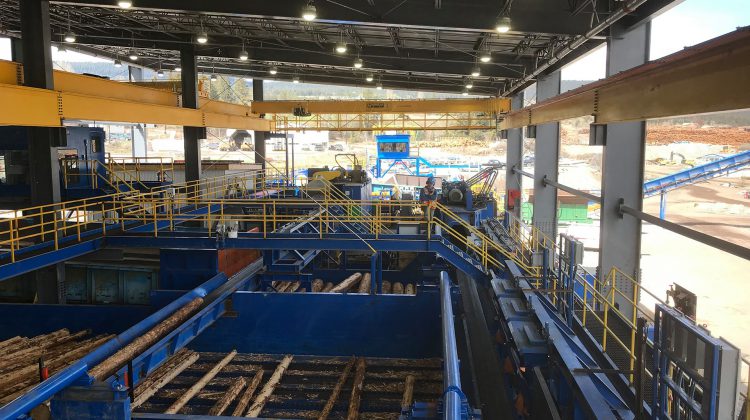 After a year-long rebuild and an in-depth restart process following a devastating fire, Tolko’s Lakeview Division in Williams Lake has returned to full operations.

“The fire started in November and people have been displaced since then so this is really good news for not only the employees that work at Lakeview but for the community.”

The sawmill had been closed since November 2017 after it was heavily damaged due to a fire that broke out on the morning of Thursday, November 2.

“There were challenges without a doubt because there were things that happened that were unforeseeable which delayed it,” French said of the rebuild.

“It was nerve-wracking for a lot of people who weren’t exactly sure where they were sitting at the end of the day. So it’s good to see it finally coming to end.”

175 employees were employed at Tolko’s Lakeview Division before the fire.

French said until inventory is built up to bring back the planer, he expects they won’t be back to the full number of employees until the end of June.

“When a fire devastated Tolko’s Lakeview division in November of 2017, we made a commitment to Lakeview employees and the people of Williams Lake,” Vice President of Solid Wood, Troy Connolly said in a news release.

“We promised to rebuild the mill and return to operations in better shape than ever. Today, thanks to the dedication of the Lakeview team, we are doing just that. The rebuild is not only complete; it also includes incremental capital investment over and above fire damage costs to improve the mill’s competitive position and ability to deliver products to the market.”

BC Lumber General Manager Randy Chadney called the newly rebuilt sawmill a now world-class manufacturing facility and said the enhancements will improve competitiveness from a cost and productive perspective.

Jason Favel, Lakeview Plant Manager, has been overseeing the mill through the rebuild and restart.

“When we lost the mill, we were devastated,” Favel said.

“We wondered if this was the end for Lakeview. Now, we’re back, and we’re better than ever. As people return to work, it’s like a family reunion. Everyone is happy to see one another. Then they see the mill and are in awe of the changes. Everyone is excited to get back to work and to see what we can accomplish.”

“We’re going to have a family day to say thank-you to our employees and their families for sticking with us,” he added.

“All employees and their families are welcome to come, tour the mill, and enjoy a well-deserved celebration.”