Williams Lake City Council will be holding off on giving support to Pinnacle Pellet that is seeking to amend its permit which authorizes the discharge of air emissions from a pellet manufacturing facility to allow for some upgrades. 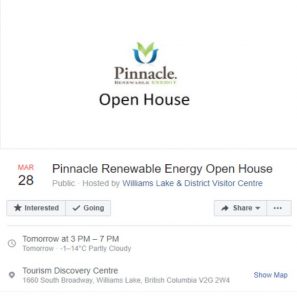 “I think it’s important to get all the information and to get a very good overview of what exactly is happening with the work that they’re doing for the Pinnacle Pellet Plant, and so then once we have all that information to be able to make an informed decision I think is really important,” Brenner told MyCaribooNow.

“I’m going to go with an open mind. It was interesting to hear the concerns about the air quality, and I thought it interesting what Councillor Bonnell had to say that it’s not all from Pinnacle. So looking at that I’m concerned about jobs and then also that they’re going to be working locally with contractors, and any information-health is for sure a big issue, what is in those emissions-that will be important too.”

Pinnacle Pellet is seeking to upgrade its baghouse, improvements to the stack to get some better air dispersion, and the addition of an authorized source low-temperature bed dryer.

“The bed dryer represents the best achievable technology, much lower emissions than tradition bed dryers (approximately ten times less emissions on a concentration basis), a lot more air flow which is going to allow for better dispersion of particulate, and we believe that we’re going to achieve a net neutral dispersion of emissions compared to the plant as it is today,” said Director of Energy and Environment, Paul Pawlowski.

“But one of the main things where we will have a real benefit is today we’re essentially constrained a little bit because we need to put our sawdust and shavings into one dryer system and occasionally people have probably noticed that from time to time there may be a blue haze.”

“With the implementation of this new bed dryer, we will essentially be able to separate our shavings which we will continue to dry in the rotary system and in the bed dryer with our wet materials so there will be no risk of overdrying shavings which can lead to that blue haze.”

Pawlowski said Pinnacle is also planning on paving majority of the site that will help reduce dust.

He added that Pinnacle Pellet has done extensive modeling exercises and that there are thousands of different chemicals that would be coming out of the stack.

“We look at what’s called the front half and the back half emissions,” Pawlowski said.

“The front half is particulate and that would be wood dust, and the back half is your condensable particulate matter that is those thousands of different chemicals and we need to ensure that we’re below our permit threshold on that end.”

Company Fibre Vice President, Jason Fisher said the Williams Lake plant was built in 2004, and that due to the changing fibre supply over the last decade Pinnacle Pellet had an inflate capacity of 200,030 metric tons a year of pellets and that right now they’re operating at about 160,000 tons.

Mayor Walt Cobb said a poll of Council will be conducted following Thursday’s open house on if the City will be sending a letter of support.