Success By 6 Closes across the Province

Success by 6 and Children First will cease to exist as funding initiatives in the province by the end of next month.

The Ministry of Children and Family Development, announced last year that funding from Success by 6 and Children First will be reallocated via MCFD regional offices and will be provided to agencies and services in their communities–such as (but not limited to) Family Resource Programs, Neighbourhood Houses and Aboriginal Friendship Centres. 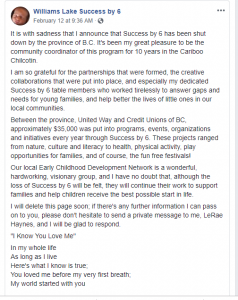 Having served as the community coordinator of Williams Lake Success by 6 for the last ten years, LeRae Haynes says they are disappointed and concerned by some of the changes.

“So here’s what happens to Williams Lake, a person that works for the government-the Ministry in Kamloops is now in charge of this huge region that includes the Cariboo,” she says.

“So deciding where dollars are going to be spent to support children and their families are made from someone who has never been here and likely never will.”

Haynes adds that the funding allocated to Williams Lake and area will likely be a lot less.

She says while it’s very disappointing, she is confident our local Early Childhood Development Network will continue their work to support families and help children receive the best possible start in life.

“I have an undying belief that our local Early Childhood Development Network table that meets once month-it’s a powerhouse table, and I have no doubt that they will come up with creative ways to still support children under zero to six and their families to the best of their abilities.”

An average of $35,000 was able to support approximately eight legacy projects within the community each year such as the Women’s Contact Society’s early years conference, as well as free festivals.

“We’ve been busy the last few months to bring some programs to a reasonable end and also to try very hard to see if we can secure funding or support from other directions to keep some of our beloved festivals going for children,” Haynes says.

“Baby Fest was the one that we funded all ourselves, Success by 6, and we were very fortunate and delighted, thrilled to find out that the Credit Union is going to step up and take it.”

$1.2 Million Dollars of Children’s Programs in Northern BC Gone Estimates CEO of United Way Northern BC

Success by 6 was launched more than 15 years ago after the Ministry of Children and Family Development announced funding towards a new initiative. Through negotiations for the entire province, a branch of United Way called Success by 6 was created with Credit Unions of BC, United Way, and the Ministry serving as partners.

Money was then invested and distributed to each of the United Ways in their region to support early years from 0 to 6, community coordination, family support, and on the ground direct service programs. A second stream of funding called Children First was also launched in some of the regions.

“That all turned upside last year down when the announcement came that they were no longer going to be doing family support, family coordination, and only direct service programs,” said Roberta Squire, CEO of United Way Northern BC.

“It came as quite a shock to a lot of the communities. A lot of puzzling and unanswered questions still to this date, and not a lot of knowledge or information being passed because I think they’re still trying to figure it out.”

Serving north of Quesnel to the Yukon-Alberta Border, Squire said they carried both streams of funding-Sucess by 6 and Children First.

“I have 28 early year coordinators and some of them have been here the entire decade or more that are now being laid off,” she said.

“We have 15 plus years of relationship with indigenous groups, indigenous community tables that take quite a while to cultivate and to develop that trust that are now going to be dismantled because there is no engagement with them with the new program which is causing quite a bit of an uproar in our communities and unfortunately a sour taste in the mouths of our indigenous partners because they’re not being consulted.”

The B.C. government estimates it has invested over $100 million in Success by 6 and Children First initiatives over the last 15 years.