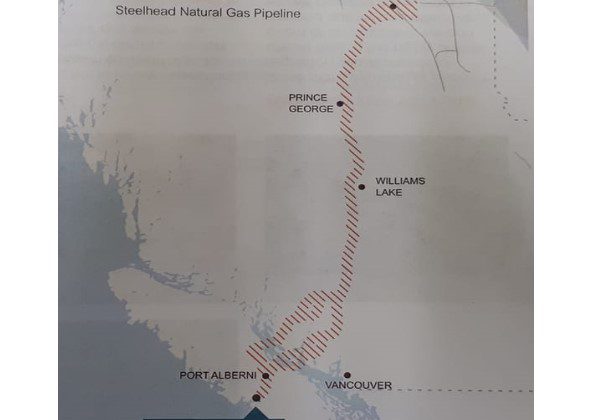 A 1,000-kilometer natural gas pipeline that would run through the Cariboo is being introduced to communities and First Nations for feedback.

Vice President of Pipeline for Steelhead LNG, Corey Goulet says the 48-inch pipeline would run from the Chetwynd area to Sarita Bay on the west side of Vancouver Island to be liquefied at the Kwispaa LNG facility which is another one of their projects.

He says that the pipeline will purposefully run around communities.

“Breanne Whyte our community engagement lead as well as Peter Kuiper our project lead for pipeline met there to introduce the project.”

He says the Huu-ay-aht First Nation who is their partner with the Kwispaa LNG facility, provided some traditional early engagement and met with most of the 35 First Nations along the pipeline.

“Our next step is to issue a project description for the project,” Goulet says.

“It’s a document that really kicks off the environmental assessment process under the British Columbia environmental assessment office. So we’ll issue that in the spring of this year, and following that our engagement will intensify; we’ll have more detailed conversations, we’ll come back to the same communities that we’ve already introduced the project to and the First Nations, and we’ll continue that engagement throughout that EOA process that will take about two to two and a half years or so.”

The pipeline in its initial configurations will ship about 2 billion cubic feet per day of natural gas which is enough to make about 12 million tons per year of LNG to Asian markets.

“In its final and expanded configuration, the pipeline can handle 4 billion cubic feet per day and it requires a few extra compressor stations along the length of it,” says Goulet.

“That would have a capacity of the Kwispaa LNG facility of about 24 million tons a year.”