Star Wars and the magical world of Harry Potter overtook Williams Lake Regional Airport Thursday afternoon to bid farewell to 9-year-old Lucie Bertoli who is off to the Wizarding World of Harry Potter World in Orlando, Florida through Make A Wish Foundation.

Claire said it was Lucie’s doctor who applied to Make a Wish Foundation last spring with Lucie making her wish in the summer.

“They did a scavenger hunt for her and she found out so we’ve been excited for a while.” 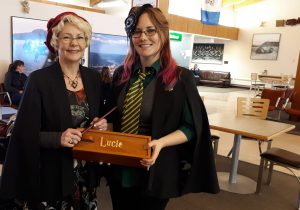 Gifting Lucie with a personalized handcrafted wand was Joan and Jazmyn Douillard of Realm of Toys.

“We were asked and it’s a wonderful thing to do,” Joan said of the surprise event in which her husband, Richard had spent a couple of hours working on his lathe to make Lucie’s wand.

“Anybody I think had they been asked would have done it too. Lots of good people around willing to help.”

Joan added that she and Jazmyn still had people calling the store wanting to take part in the send-off before they left for the Airport.

“Lucie and her family are customers in our store,” she said.

“They’re a lovely family and they don’t deserve what’s going on.” 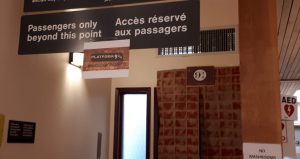 “In the process of receiving Lucie’s reservations we found out that she was part of Make A Wish Foundation,” Sundahl said.

“Of course to leave Williams Lake where she lives, she’s flying with us. So knowing this in advance we thought because Williams Lake is so great in bringing the community together, I actually approached the Realm of Toys and said is there anything you guys can do to help out to at least give her a going away party as to start off this whole special adventure for her.”

Calling it a team effort with the pilots and airport security taking part and Taylor Made Cakes donating cupcakes and Laureen Carruthers doing photography, Sundahl said it was an honor to welcome Lucie who will be turning 10 at the end of this month.

“Lucie will be coming back on Sunday, Jan. 27 so anybody that wants to come and greet her is welcome,” Sundahl said.

“We’re going to make a nice banner to say welcome home and we’re looking forward to hearing the stories.”

During their time in Orlando, Claire said the Bertoli family will be staying at a special resort for kids who made a wish and a have a life-limiting or life-threatening disease called Give Kids the World.

“She’s dealt with all this very maturely for her age so we’re very proud of her.”