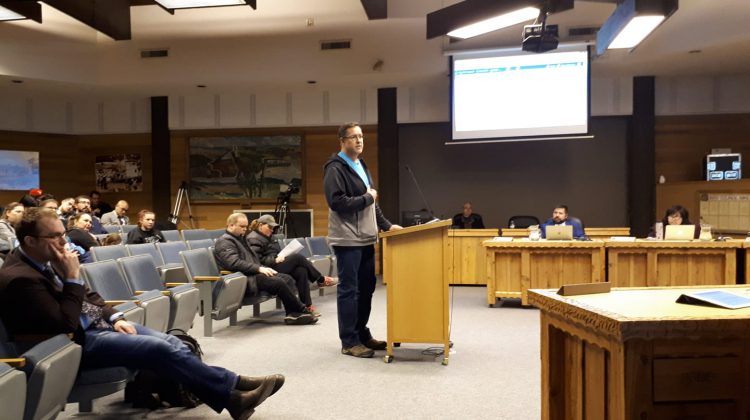 “We see the vagrancy, we see panhandling, and does City Council really want to be that City Council in Canada that does a variance to a bylaw to allow a dispensary to be located on the same block of the Salvation Army?,” Roy Buxbaum asked Tuesday evening as Williams Lake City Council considered a development variance permit for a downtown cannabis shop.

“What do you guys think is going to happen? I might not be the smartest pencil in this room, but I certainly know what is going to happen. I’m going to have to walk my mom into the bank every time she goes in there so she’s not accosted by someone to get together 10 dollars to buy a gram. Where I do have an issue is where it’s at.”

Owner of Good Guys Gardening, Buxbaum received support by Council in November for his proposed cannabis store at 250 Mackenzie Avenue South and maintained if Council is going to set variance bylaws, they need to be honored.

Earth To Sky Cannabis as they are now named after having learned their previous name FLORA Cannabis was already trademarked said their plan was to demise part of the End Of The Roll to locate the store within that property. The variance permit was requested as it’s 460 meters away from Buxbaum’s location and not the required minimum distance of 500m from an approved retail cannabis store as per the Zoning Bylaw.

“We have a real problem on that section of town with traffic and parking flow,” said Paul French with United Steelworkers Local 1-2017 whose office is nearby.

“Second Avenue and Borland you might want to take a look at how many accidents have been there because I walk there every day and it’s congestion with the two banks in each corner, and the four restaurants and parking comes and stays.”

Pointing that the beer and wines stores, and liquor stores are located within the outlying area and on a main arterial roadway, French said the 2-hour downtown parking limit is not being enforced.

“What’s really ironic is some of the people that are down on Oliver Street or the other side of second come and park in our area so there is parking in front of their stores. The light on second avenue and Oliver, the second avenue end, sometimes it’s three minutes before that light changes. You’re probably going to have to put in four-way stops in at second and Borland, so now you have a light that doesn’t work and that traffic system becomes a nightmare.”

French also suggested to Council that to go and try to make a left-hand turn on third and Borland, they’re probably going to have to put in a four-way stop.

“For those reasons, I think Council should be very concerned of approving this variance, not because of what the retailer is going to be,” he said.

“We want commercial development downtown, but what I’m saying is the type of business is going to cause a lot of problems for traffic.”

In the end, although the development variance permit was approved 4-2 by Council with Councillors Sheila Boehm and Craig Smith not in approval, support for the retail cannabis provincial license application was defeated after a tied vote. Councilors Jason Ryll, Ivan Bonnell, and Mayor Walt Cobb supported the recommendation with Councillors Marnie Brenner, Boehm, and Smith against it.

“We’re dealing with a new issue that we’re not getting a lot of guidance from other senior levels of government,” Ryll said of the variance permit.

“So to be fair, we’re trying to wade our way through these the murky waters as much as business owners and proprietors and community members are. I think we’ve identified a bit of a flaw in our bylaw currently and I think we’re going to have to revisit in the future.”

Councillors Smith, Boehm, and Brenner all agreed that they had concerns with the proposed store location, with Mayor Walt Cobb saying one of the biggest complaints he’s received is drug dealing activity at the library.

“I have some concerns about the location and I feel being elected to City council holds a lot of weight and responsibility,” Brenner said.

“I feel that we have a responsibility to our vulnerable population.”

A variance permit application was unanimously approved by Council for a proposed cannabis store at 68 Broadway Avenue North as well the recommendation to support the proposed provincial license application for it and a proposed store at 3015 Mackenzie North.

Councillor Scott Nelson did not vote on any of the recommendations as he owns 68 Broadway Avenue North and declared a pereceived conflict of interest before leaving Council chambers.