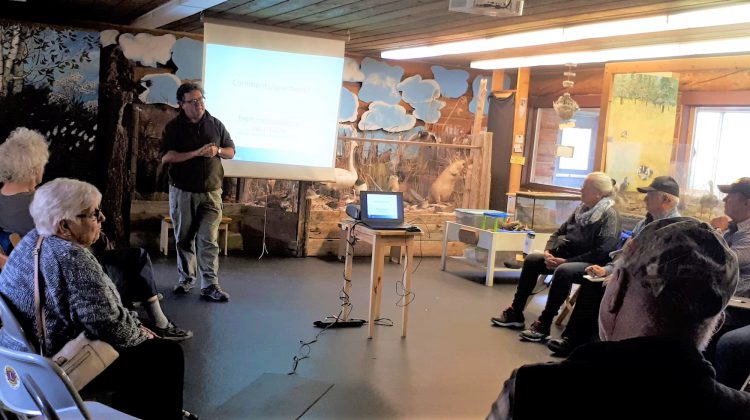 Air Quality was the focus of a workshop held at the Scout Island Centre in Williams Lake.

He says it’s important to recognize that this year and last year’s wildfires have had an unprecedented effect on the statistics they use to write how the air quality is changing and against the objectives.

“If we removed those, in other words, if we said what would the air quality be without the wildfires currently Williams Lake meets the provincial and federal objectives for PM 2.5,” he said.

“But when the fires are included we are now far over those objectives.”

How to deal with that in terms of regulatory work and also tracking emissions in airsheds Adams says is still being worked on.

“I think it will probably be a couple of years before we’ve decided, but the good news is for the sources that are within the airshed of Williams Lake, Williams Lake is generally meeting the federal and provincial objectives and there does not seem to be an indication that things are getting worse.”

Because of a current appeal, Adams said he could not answer any questions related to Atlantic Power’s burning of rail ties.

“As soon as the appeal board has made their adjudication, I and my colleagues would be more than happy to discuss any questions residents might have about that,” he said.

“The appeal is in its final stages where the final arguments are submitted. This appeal will be done in writing rather than in a hearing, and I believe the appeal board has a number of months at least to render its decision. So sometime I would suspect in the next six months this will be resolved and be able to be discussed openly at the Air Quality Roundtable.”

Adams adds that he is hopeful that the workshop will lead to a volunteer to chair the Air Quality Roundtable.

“We are certainly looking for someone to volunteer and be the champion for air quality-someone that can speak up to support initiatives in the community to improve air quality, someone that can be centre for questions coming in from the public, and all the other things that happen for air quality ,” he said noting that all the best airshed management plans have had a strong role for local politicians.

As for why everyone should care about air quality, Adams says the lessons that we have learned in the last decade in epidemiology and health is that air quality even at low levels has a profound health effect on the population.

“Air quality does not just deal with air or the effects on health, but it affects the quality of life and it affects how business and tourism operates in an airshed,” he said.

“So it’s important on a different number of levels.”