Campfires To Be Prohibited in Coastal Fire Centre Due to High Temperatures, No Immediate Rain

Campfires will be prohibited in the Coastal Fire Centre with the exception of  Haida Gwaii and the area known as the fog zone as of Wednesday, July 18 at noon. 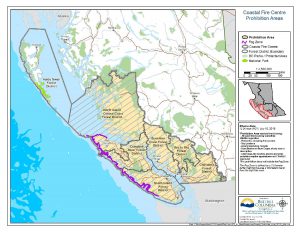 “The Coastal Fire Centre is implementing these prohibitions due to high temperatures and no rain in the immediate forecast,” said fire information officer Donna MacPherson.

Since April 1, 2018, 69% of wildfires in the Coastal Fire Centre have been caused by people.

The prohibitions do not apply to CSA-rated or ULC-rated cooking stoves that use gas, propane or briquettes, or to a portable campfire apparatus that uses briquettes, liquid or gaseous fuel, so long as the height of the flame is less than 15 centimetres.

The following activities are also prohibited:

The Coastal Fire Centre covers all of the area west of the height of land on the Coast Mountain Range from the U.S.-Canada border at Manning Park, including Tweedsmuir South Provincial Park in the north, the Sunshine Coast, the Lower Mainland, Vancouver Island, the Gulf Islands and Haida Gwaii.

The prohibition will remain until Oct. 19, 2018, or until the public is otherwise notified.

(With Files from BC Wildfire Service)