Signage reminding the public about the importance of the cow moose in maintaining a healthy moose population continues to be put up in various areas across the nation.

“We’re up to probably 425 signs out there now and they’re spreading throughout the province,” says Dan Simmons of the not for profit Cow Moose Sign Project that was initiated by concerned local hunters in the fall of 2014.

“They’ve also gone into the Northwest Territories as well, Quebec, and Ontario-it’s growing.” 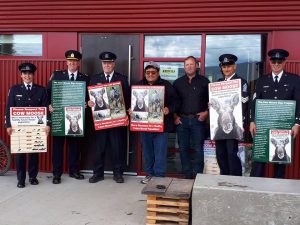 Simmons donated two 4 by 8 signs, and a number of smaller signs to ?Esdilagh First Nation last week who signed a one year MOU with the BC Conservation Officer Service to promote the sustainability of wildlife within its traditional territory, and COS enforcing communal restrictions which prohibits the harvesting of cow moose for membership within its traditional territory.

“Hopefully other nations will jump on board with us with no hunting of the cow moose,” said Chief Roy Stump.

Stump said the signs with the Cow Moose Sign Project will be put up from the main entrances from the north from Quesnel, and from the south from Williams Lake, and all along the Fraser River.

“When we first started we had 6 signs made and I never thought it would go to this extent by any means, and we’ve had so much support I’d say the last 2 years of the program with all of the First Nations in our Region 5 have all acknowledged and put up signs,” says Simmons.

Cow Moose sign(s) and brochures can be purchased by contacting Tell-Tale-Signs & Printing in Williams Lake at 250-398-7446.