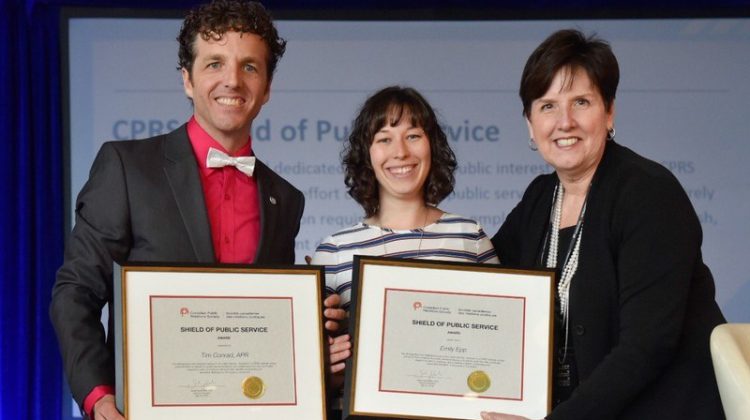 The Canadian Public Relations Society announced two recipients of its’ Shield of Public Service Award this week in Charlottetown, PEI  for their valiant communications efforts surrounding last year’s wildfires in the Cariboo-Chilcotin.

Manager of communications with the Cariboo Regional District Emily Epp says to be recognized with Tim Conrad for their work is an incredible feeling.

“Being from Williams Lake it’s such an honor to have done that work for our community and the region, and just the recognition of the whole team behind all of our work,” says Epp, “we had about 120 people working in the emergency operations centre in the Cariboo last summer.”

The CPRS says like Epp and Conrad, Shield of Public Service Recipients have demonstated unselfish, outstanding, and persistent dedication to the cause or movement far beyond the call of duty.

“During the summer we were working pretty long days anywhere from 12 to 16 hour days and sometimes more on the days where we had emergencies or evacuations happening late in the evening,” says Epp.

“Our whole team was putting in long hours but I think I can speak on behalf of all of the people in the emergency. We really wanted to be there and we knew it was what we needed to do for our community.”

An estimated 60% percent of the region’s population was affected by the 272 wildfires last year that burned more than 996,000 hectares.

“I think there’s a lot of things that we learned along the way,” says Epp.

“Specifically for communications a lot of the things we changed and adapted as we went along like our phone system and our call centre really expanded throughout the emergency, we started using video updates to communicate with people, and a lot of our communications really improved.

“I think a lot of the things we’re taking away going back in to next summer is these things that worked really well last summer we want to do them again, and some of the things that didn’t work as well we need to improve or help educate people how it works like our emergency notifications system.”

Prior to becoming the CRD’s manager of communications Epp had worked as an information officer for the Cariboo Fire Centre.

“I think having that understanding of how the Cairboo Fire Centre works and the people especially in the information team from BC Wildfire Service was a huge benefit because I was able to bring that knowledge into our emergency operations,” she says noting that Conrad, Mike McCauley, and herself were delivering a presentation at the CPRS conference about how videos were used and what they learned.

“I think that’s why we were able to start using videos and why they were such a big success is because the BC Wildfire Service and their team knew me and we were able to work well, and that’s now a model that a lot of regional districts have started to use using video updates.”