The first in a new series of a live music event in support of the Museum of the Cariboo Chilcotin will be taking place tonight in Williams Lake. 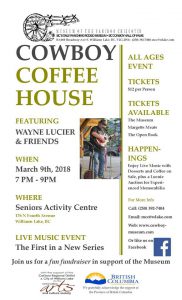 “We at the Museum we’re looking to get some new live music events in Williams Lake. We’d like it to be a fun festive evening for everyone, and get this going and be more of a regular occurrence,” says coordinator Joe Borsato.

“If anyone had fun at the Dark Times last weekend, this is the same sort of thing.”

All funds raised from tonight’s Cowboy Coffee House will support the operations and initiatives of the Museum.

It is open to all ages and takes places at the Williams Lake Senior’s Activity Centre starting at 7 pm.

“I’d like to have some good figures,” says Borsato.

“Last year we usually do a cowboy-Christmas craft fair and concert-we didn’t do that due to the wildfires messing up our scheduling and our volunteers were away. We’re looking to recoup some of the loss from not doing that this year and we’d really to see a good vibe in downtown Williams Lake and get lots of people coming and enjoying live music, having some coffee, and talking to friends. It’s sort of a community spirit building process which I think is really important in the era following the mega-fires.”

Although no dates have yet been confirmed for future series, Borsato says that they are hoping to have another one in April.

As for the Museum itself located at the Williams Lake Tourism Discovery, Borsato says that they have had a lot of visitors, interested guests, and tourists come through.

“We’ve made a few little display changes since the fall and we’re hoping to do a whole bunch of new displays by the summertime which will take up a bit more space. So we’ll have probably double, triple the amount of the space that we have right now. So that’s also very exciting,” he says.

“Besides that, we are running a new education program that will have kits with replica artifacts that will be going out to schools, and we’re also looking to revamp quite a bit of our Indigenous exhibit.”