A thank you card that made its rounds to Cariboo Regional District Offices for residents to sign finally made its way to Fort McMurray.

Area F Director Joan Sorley was able to personally deliver it on Sunday after having visited with family. 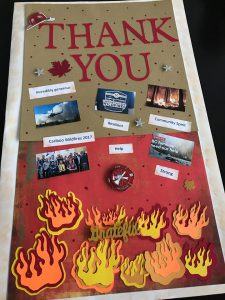 “Some people in Fort McMurray arranged so that I could deliver the card to City Hall to the offices of the Mayor, and there were 3 City Councillors there,” she says.

“They were very gracious and they said anytime we’re there we should keep in touch and go see them again.”

Although the snowstorm prevented some Cariboo residents from signing the card, Sorley says that it was full of signatures all over.

She adds that she also had the opportunity to meet a couple of the guys who came out to the Cariboo during the wildfires and help deliver supplies.

“I was able to get ahold of them-actually my son did, and we had dinner on Sunday night. McLeese Lake  is planning a party to thank them and they’re going to be coming out for that.”

“I think that this relationship is going to continue.”