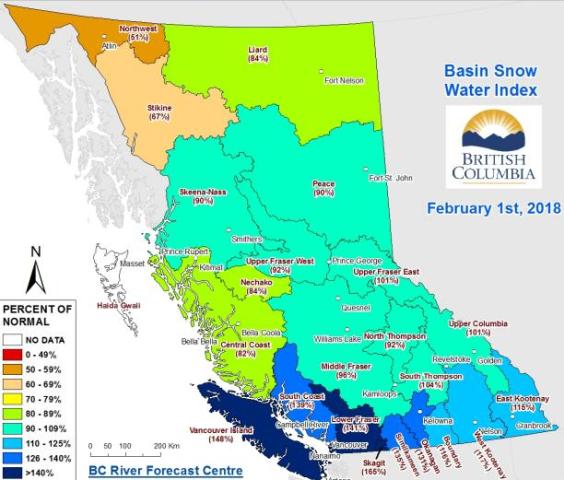 The BC River Forecast Centre issued the results of their February 1 snow survey for the province last week.

“It shows a snowpack of on average 96 percent and that’s an increase of 10 percent from January,” says hydrologist Jonathan Boyd of the snow basin indices for the Cariboo area.

“And relative to February 2017 it was 81 percent. So it’s about near normal at this point in time.”

Boyd says although the survey did not include the intense snowstorm that recently rolled through the region, they do have automated snow weather stations.

He estimates that within the past week it has gone up by 10%.

“By February 1st on average about two-thirds of the provincial snowpack has accumulated. So the bulk of the snow has usually arrived at this point in time,” he says.

“Then it’s a matter of whether we’ll continue to get some fairly decent snow accumulations or whether it will dry out.”

The survey shows well-below normal snowpack present in the Stikine (67%) and Northwest (51%).

Above-normal snow pack between 110-120% is also present in the East Kootenay, West Kootenay and Boundary regions.

The snowmelt component of seasonal runoff on Vancouver Island, South Coast, Lower Fraser and Skagit is expected to be higher than normal given the high snowpack in those regions.

An updated seasonal flood risk forecast will be released by the Centre on March 8th.