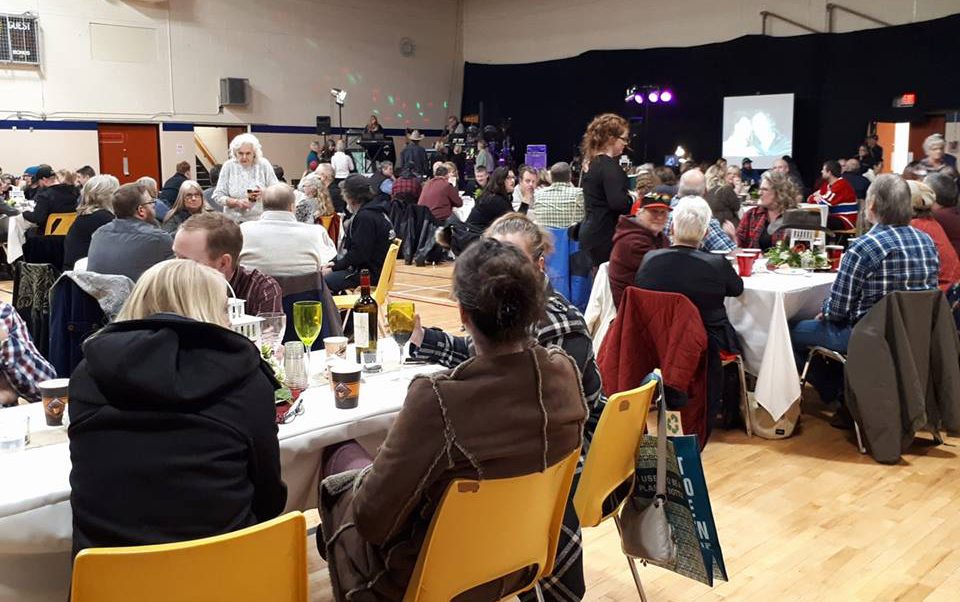 Over 150 people gathered at the TRU gymnasium Saturday evening in Williams Lake to show their support for local resident Michelle Ball LaPlace who remains in Vancouver recovering from a recent heart transplant.

“I’m overwhelmed with the people that have come out to support my sister in her time of need,” says Anthony Ball.

“It’s a beautiful thing to see about our community.”

Michelle who was diagnosed with hypertrophic cardiomyopathy in 2016  and was in congestive heart failure got the call for a new heart according to Anthony on January 26 of this year.

“We were supposed to have dinner Friday night and she phoned me up Friday morning that dinner was cancelled and she was going to Vancouver for her heart transplant.”

“It was a bit a of shock,” he recalls. “It was nice to hear because it was round two of the heart transplant listing for her as the first one wasn’t viable.”

For the day of her surgery, Michelle was joined with her husband Jamie who currently remains by her side. The pair are currently at a special home that is located near the hospital so Michelle can attend clinics and be monitored for any rejection.

“The heart transplant happened sooner than expected so I was asked if I could help,” said Michelle’s sister-in-law Linda Hillegeist.

A close friend of Michelle’s, Cindy Nadeau who helped organize Saturday’s event says that it snowballed from the idea initiated by musician Randy Pokeda.

“I’ve known Michelle for years through a lot of different walks of my life,” she says.

“She was my hairdresser, she’s been an emcee at countless community events primarily the Harvest Fair. So I’ve known her through my music world.”

Although the final figures are not yet in from the event that saw the crowd break into cheers when Michelle and Jamie greeted them live through FaceTime, Nadeau believes that over $12,000 was raised.

“It just makes us all so proud to be part of Williams Lake and call this small town our home because we know we can count on our friends, neighbours, and our business community to rally together and be there,” she says.

“This community always has had so much heart; it always had especially when you figure in the wake of last year’s wildfire season and how the fundraisers that have been done for people who have lost their homes, and now Michelle. Just from one thing to another, the community just rallies to support that and it’s incredible.”

The event for Michelle according to Nadeau had TRU donating the venue, businesses donating food and over 70 items for the silent auction, as well as numerous members of the community donating money and time.

“The list just goes on and on it’s endless,” she says.

“From the bottom of my heart, as well  as I know Jamie and Michelle’s I would like to thank the community of Williams Lake for being who they are.”

Nadeau says she will be delivering the proceeds from the event to Michelle later this month.

“That will be a gratifying day, a gratifying experience for me to be able to just hand it all over and bring her some of the things she needs for her stay down there.  It could be up to a year before Michelle can come home, but we’ll all be here waiting for her when she does.”