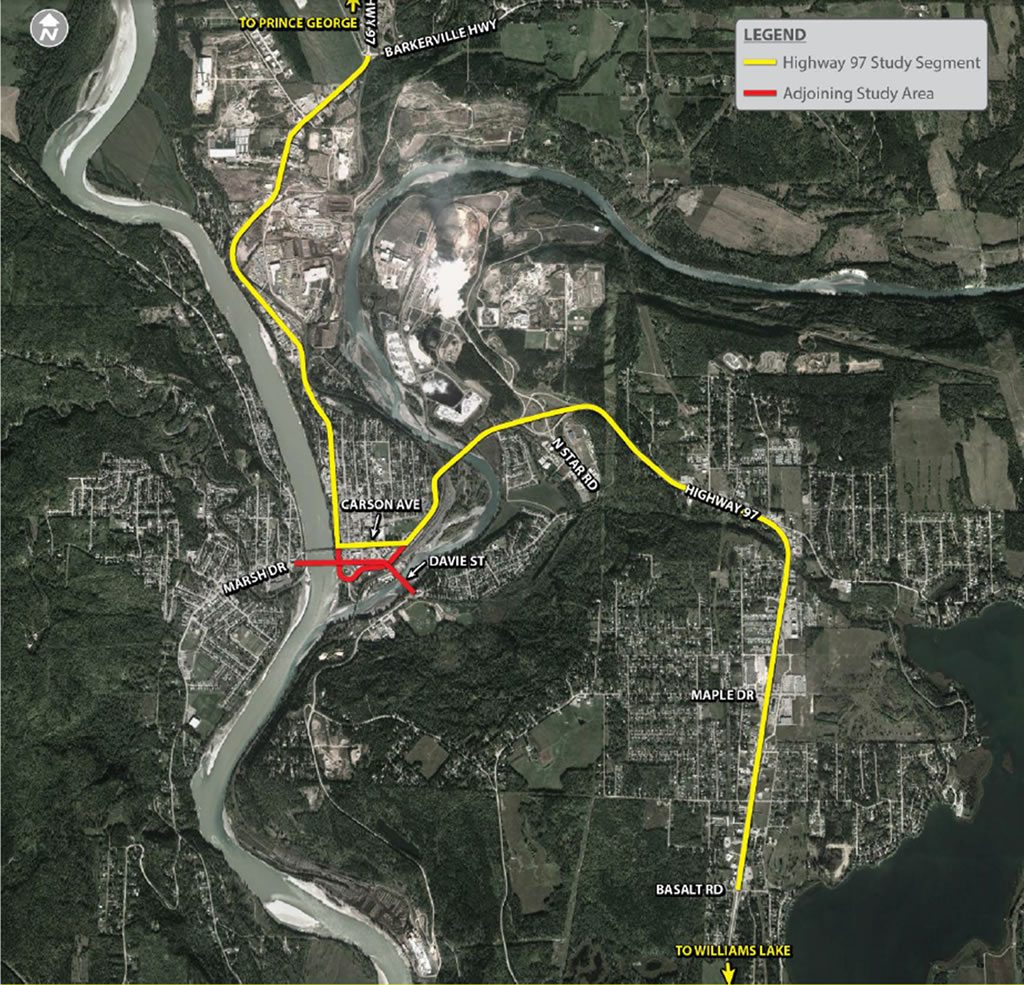 Plans for a Highway 97 north-south interconnector was on display yesterday afternoon as the City of Quesnel and the Ministry of Transportation and Highways held an open house at the Seniors Centre.

It has been a long time coming but there is now one preferred route up for public review.

Shawn Clough, the Project Manager with the Ministry of Transportation, says they key to what they’re doing is the replacement of the two bridges over the Quesnel River and the BC Rail.

“You cross the BCR…both of those new bridges are proposed to be upstream, so to the right. And as you come into North Quesnel what you’re going to do is swing a right and you’re actually going to along the top of the hill between the train tracks and the community all the way along past the Catholic church and enter where the Super Save gas station is on Two Mile Flat.”

Clough says two other routes, bypasses that would go through Cariboo Pulp and tie into Two Mile Flat or to the Highway to Barkerville, but both were more expensive as they would require another bridge and more road and both would not get the truck traffic off of Front Street which is what they have heard loud and clear from the public.

The cost of the proposed interconnector is around 275 million dollars, 125 to 150 of which is for two new bridges.

It would also involve some geotechnical work…

“In the event we move forward we have to do a tremendous amount of on the ground investigation. We’ve got to get in there with drill rigs, pop some holes in the ground and have our geotechnical scientists really tell us what we need to do for the stability of the road. In the event we get approval for that project we are foreseeing walls. We’re going to have a wall on the property side, then the highway and a wall down to where the railway is.”

Under this plan, if it gets public support and government funding, the Ministry of Highways would then devolve Front Street, Carson Avenue and Legion Drive back to the municipality.

“We’ve also got access improvements to South Quesnel as an option. There are a lot of uncontrolled access points to the Highway, we go from four lane to two lane back to four, so we’ve got some options there that we’re presenting to the public. And Two Mile Flat, we’ve got a couple of options. If you’ve drove it you know that there is truck traffic coming and going and turning in and out of a whole bunch of different access points, so we’ve got one way where we’re trying to encourage the access to the businesses through a back road system, which is off the Highway. The other is we take the highway corridor and change into more of an urban environment compared to the rural environment it currently is, have two lanes of traffic up and down and then really consolidate and minimize the access points.”

He estimates the cost of that project to be in the three to five million dollar range.

All of this can be found on the ministry’s website at www.gov.bc.ca/quesneltransportationstudy.com