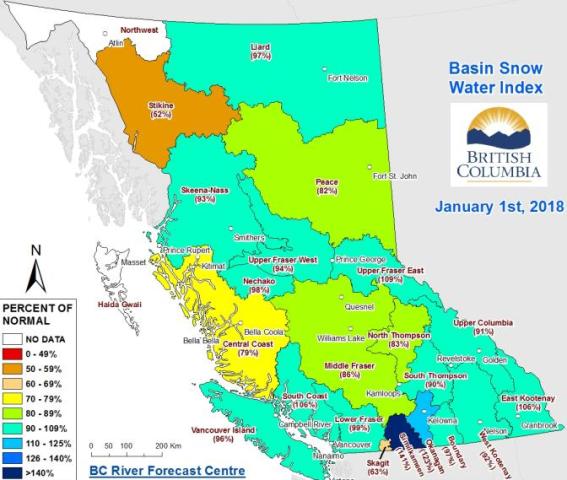 The River Forecast Centre has released the results from their January 1st snow survey that shows snowpack totals for the Middle Fraser Basin measuring 86 percent of normal.

“Zooming into more of the specifics of the area, it is quite big so you get quite a lot of variation,” says Dave Campbell, Head of the BC River Forecast Centre.

“When we look at more specifics say around Williams Lake area it is a little bit on the lower end than that 86 percent number. Sort of looking at the 60-80 percent range.”

Campbell adds that a greater number of measurements will be taken through the year.

“January is very preliminary for us; we’ve got a little less than half of the snowpack we’d expect to see by this time. There’s still a few months of winter accumulations still to come and where we’re at right now can change quite a bit over the next few months.”

The provincial average is at 96 percent of normal according to Campbell noting that higher snowpacks in BC are expected because current ocean patterns are in an El Nina cycle.

The next snow survey and water supply bulletin will be released on February 7.