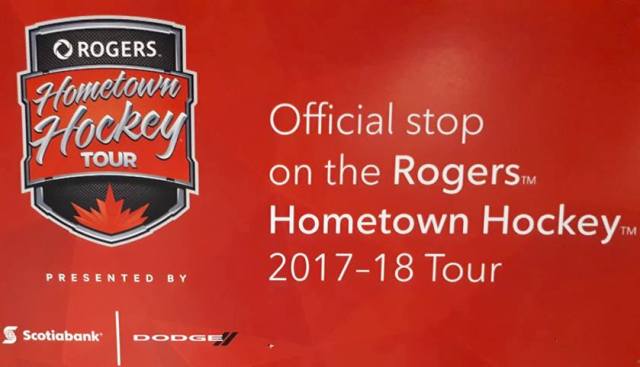 Details and activities are starting to come together for the upcoming two-day hockey festival in Williams Lake.

“One of the events that we are finalizing is our local organizing committee has worked with Rogers to plan a pep rally for Friday, January 5. This is going to be kind of the launch of the weekend and will be in the Gibraltar Room from 10:30 am until 12pm.”

Highlights of the pep rally according to Radolla include Hometown Hank, the mascot for Rogers Hometown Hockey, and a performance by hockey stick juggler Paz along with local talent.

“Also to get everybody revved up for the weekend the Tourism Discovery Centre is going to be hosting a coloring contest all day from 9 until 5 and there will be a hockey-related movie at Paradise Cinemas,” says Radolla.

The evening’s broadcast kicks off with a special pre-game show hosted live on site by MacLean and Slone from the Sportsnet Mobile Studio beginning at 3:30 p.m. PT on Sportsnet and Sportsnet NOW, followed by a showdown between the Vancouver Canucks and Montreal Canadiens.

The free hockey-themed weekend will feature games, prize giveaways, fun activities, and live local entertainment for the whole family, including:

All season long, fans can tune in to the Sunday night broadcast on Sportsnet and Sportsnet NOW for a chance to win weekly prizes through the Rogers HometownHockey Contest. Join the conversation by using each week’s unique hashtag to tweet @Rogers to automatically be entered for a chance to win a number of prizes, including a trip to the 2018 Stanley Cup® Playoffs. The contest runs during every Sunday broadcast through to the final Rogers Hometown Hockey of the season on Sunday, April 1 from Montreal.