First Book Canada and Scotiabank Partner Up to Distribute Over 1,500 Books at Marie Sharpe 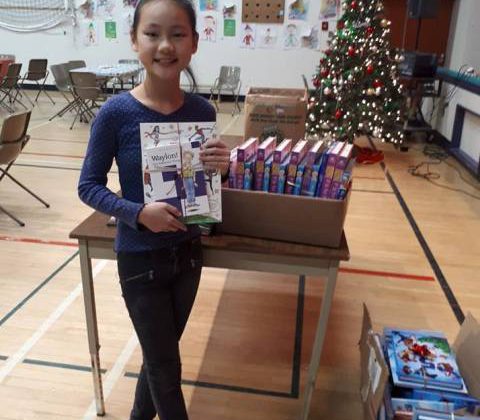 It was an early Christmas for students at Marie Sharpe Elementary as First Book Canada and Scotiabank distributed more than 1,500 books today to boost morale and a sense of community for children affected by the B.C. forest fires.

Principal Calvin Dubray says he was first contacted by First Book when school started in September.

Dubray says that two books will be going home to each of their 202 students with some of the books being donated to smaller schools out West and East.

“The kids have been hearing little bits and tidbits about the presentation but they had no idea that this was coming,” he says noting the arrival of the books was a nice fit as they were having their annual turkey Christmas lunch.

“So it’s been a nice early Christmas for them.”

Senior Manager of Regional Marketing for Scotiabank, Grace Kim says this was something they were doing for B.C schools as something extra to support the areas that were affected by the wildfires this summer, and that this particular initiative with First Book Canada is a first.