The President of the Cariboo-Chilcotin Teachers Association (CCTA) hopes that parents start asking questions about why their child can’t access educational services that other districts have readily available to offer and to improve on after a motion of non-confidence was passed in the Superintendent, Secretary-Treasure, and Board of School Trustees of School District 27. 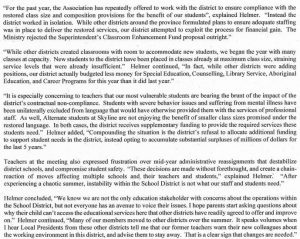 The CCTA issued a statement Wednesday and said the motion was passed by membership without dissent at a Special General Meeting on Monday citing concerns around personnel practices, financial mismanagement, and the failure to fully comply with the Supreme Court ruling to fully restore contractual provisions of class size and composition.

CCTA President Murray Helmer says that the CCTA Executive had passed a motion of non-confidence in the School Board last year and that on-going efforts by the Association failed to make any headway with District Operations.

Contract compliance according to Helmer was a recurring theme.