Theft of Vehicle, theft from vehicle, robbery, mischief under $5,000. and assault offenses are all down in Williams Lake according to the latest crime statistics.

Officer in Charge of the Williams Lake RCMP Detachment, Inspector Jeff Pelley says he believes that the decreases mainly has to with their strategies that police have implemented. 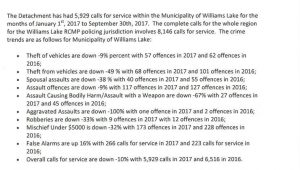 “Our enhanced policing with the Crime Reduction Unit, the initiatives with our General Duty uniformed officers, and our General Investigation Section are working in strategies that overlap with one another to focus on these individuals responsible for the crime trends.”

There are currently five of twelve identified prolific offenders who remain in police custody.

11 breach investigations have been pursued for 6 different individuals for non-compliance of curfews.