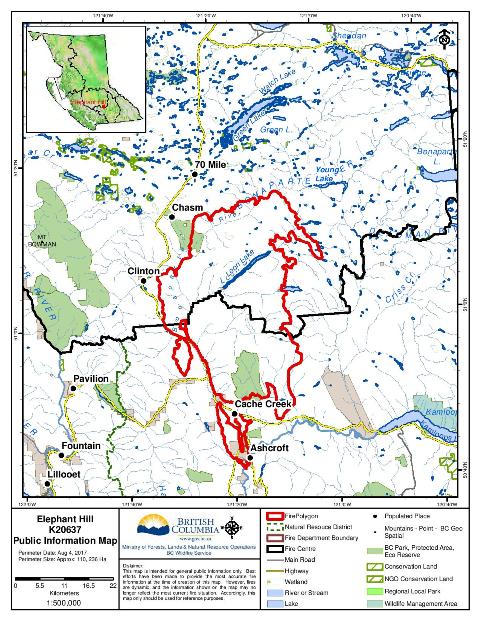 As of Saturday, August 5 the Elephant Hill Fire is now estimated at 110,236 hectares.

“There was quite a bit of a northerly wind yesterday which did push our southeast and southwest flanks to the south,” says Fire Information Officer Heather Rice. “It’s also slightly better mapping that we receive when the days are clearer which we did have yesterday.”

“I can tell you those push to the south did not increase the fire over the Highways.”

Rice says on the north flank of the fire crews had a very successful controlled burn which helps protect the area of Chasm, and that a good guard is in place.

She says smoke may be visible today as crews will be doing controlled burns east of Clinton to help enhance the northwest flank.

Over 600 personnel including 441 firefighters, 22 helicopters, and 105 pieces of heavy equipment are working on the blaze.

The fire has been called ‘An absolute monster’ by BC Wildfire Service Chief Fire Information Officer, Kevin Skrepnek.

He says it is the highest priority fire in the Province.