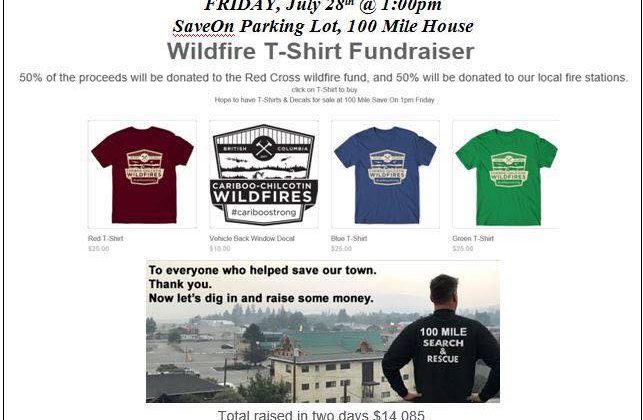 A member of the South Cariboo Search and Rescue will be selling T-shirts all day Friday, June 28 with the words #cariboostrong.

Shane Gunn says he and a friend came up with the idea to raise some funds for both the Red Cross and local fire departments throughout the region from Loon Lake to all the way north of Williams Lake.

“Both my partner and I who are involved with this we grew up at the 108 Ranch same street, Block Drive and that was the area that was impacted the most with the Gustafson wildfire. It literally burned right to our family home’s front door so it had quite a profound impact on us and this is just one of the ways to give back.”

Gunn who was wearing a t-shirt himself when we spoke with him Thursday afternoon, says he was in Williams Lake and met with Mayor Walt Cobb, CRD Chair Al Richmond, and local MLA Donna Barnett and got them T-shirts as well.

He’ll be selling the t-shirts at the South Cariboo Farmers Market until about 1pm, and then at Save On until 5 before heading off to Jackson’s Social House.

Almost $25,000 so far has been raised through the online sale of the T-shirts.