Incoming Weather To Cause an Increase in Fire Behavior 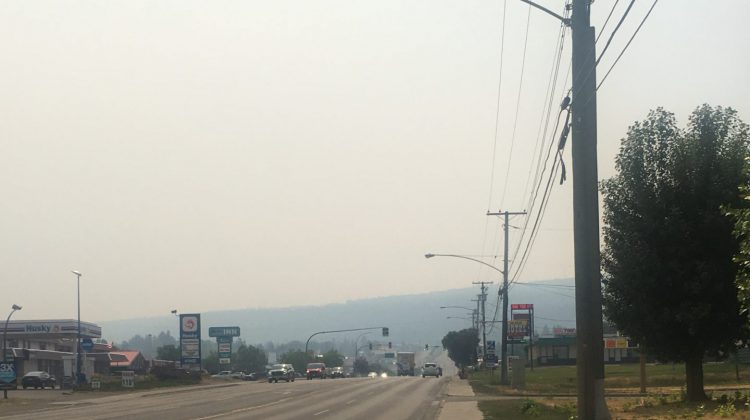 Smoke from a wildfire that forced an evacuation order for a number of properties northeast of Clinton covered the District of 100 Mile House today.

“Yesterday (Tuesday) we had unforecasted easterly winds that caused a breach of the containment line on the north-west flank of our fire which is on the Clinton side of the fire.”

MacAulay says they reallocated all of their resources which include aerial support equipment and ground crews who are assessing the situation.

The Elephant Hill Wildfire formerly known as the Ashcroft Reserve Wildfire in the Kamloops Fire Centre currently covers about 61,500 hectares.

Further updates on evacuation orders and alerts for that area can be found on the Thompson-Nicola Regional District webpage.

The BC Wildfire Service warns that after several days of favourable weather for firefighting, weather conditions are worsening in the Cariboo Fire Centre.

“Winds are anticipated to pick up the afternoon of July 26 and are forecasted to reach 25 km/h from the southeast, with gusts up to 40km/h. Winds are expected to shift later in the day to 20 km/h, with gusts to 40km/h from the northwest and persisting until midnight,” the Service stated in an information bulletin.

“There is also a chance of lightning throughout the Cariboo Fire Centre, which could start new wildfires. Winds associated with lightning storms will be gusty and their direction will be unpredictable. No significant amount of rain is expected. Winds will pick up again tomorrow and the risk of lightning will continue through Thursday, July 27.”

The major wildfires burning in the Cariboo Fire Centre, with the exception of the Gustafson fire, are classified as “out of control”.

“Large areas of these fires are uncontained and their perimeters will grow with the winds that are expected. The containment percentages are likely to decrease as these fires spread,” said Fire Information Officer Natasha Broznitsky.

“It is also possible that some containment lines may be breached if the winds are significant enough to push the fires into unburned fuel across these lines or create new spot fires outside of the main fire areas.”