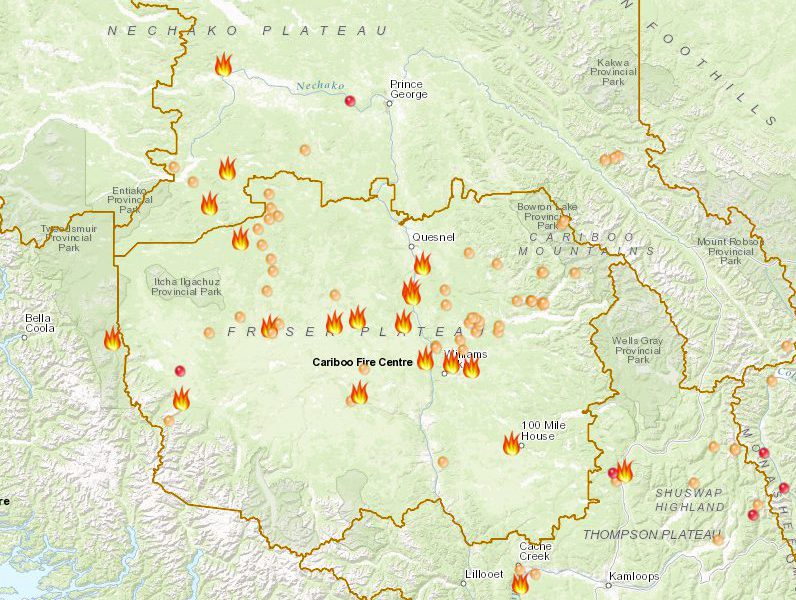 Crews continue around the clock to attack and contain wildfires within the Cariboo Fire Centre.

Fire Information Officer Melinda Paplawski gave us an update Tuesday morning on the wildfires around the City of Williams Lake and area which remains under an evacuation order.

“For Spokin Lake we currently have 2,650 hectares although we did successfully do a controlled burn of a big chunk of it out there yesterday (Monday) so we would expect that number to increase a little bit but it will be part of what we burned deliberately. We have about 108 people on it.”

She says the Wildwood fire is at an estimated 13,215 hectares in size and that 206 firefighters, 47 pieces of heavy equipment with air support are being used.

The White Lake Fire is an estimated 8,107 hectares. Paplawski says 101 firefighters are working on it today to continue working on continuing to build dozer lines around the outside to start working with water trucks to knock down hot spots.

In the Chilcotin Zone as of Tuesday, July 25 the Kleena Kleene wildfires is an estimated 5,318 hectares and is 50% contained.

The Hanceville Riske Fire which is over 130,000 hectares meanwhile is 45% contained. The BC Wildfire Service notes that concentration is on securing the south and southeast flanks of the fire and adds that that progress was made Monday with direct attack on many locations throughout the fire and establishing control lines with equipment.

The Chezacut Wildfire approximately 140km northwest of Williams Lake is an estimated 10,194 hectares and 25% contained with crews patrolling along the guards for hot spots.

Paplawski says although they did have a few ‘calmer’ days earlier this week when the temperatures were cooler with a few showers,  they are expecting to see more active fire behavior with increasing temperatures which according to Environment Canada will be up to 5 degrees above the normal high of 26°C up through Monday, July 31.

“We’re going to be watching out for sections that will flare-up within areas that are already burnt. They’ve kind of been sitting there and once they get the high temperatures on them it could be enough to pop them back up again.”

Chief Fire Information Officer Skrepnek says the BC Wildfire Service to date has spent an estimated $138.1 million dollars for fire suppression efforts and that since April 1 they have responded to 771 fires across the province which have burned an estimated 377,000 hectares.

He says there are currently 4300 firefighters and support staff, a little over 1,180 out of province personnel, and nearly 2,000 contractors from the forest industry with 180 aircraft today that are working to attack the current 154 wildfires burning across the province.

(Editor’s Note: This story has been updated to include the Chezacut Wildfire as well as information from Chief Information Kevin Skrepnek which was provided in a media teleconference Tuesday afternoon. The story also corrected the normal high for this time of year which was incorrectly reported as  24°C)