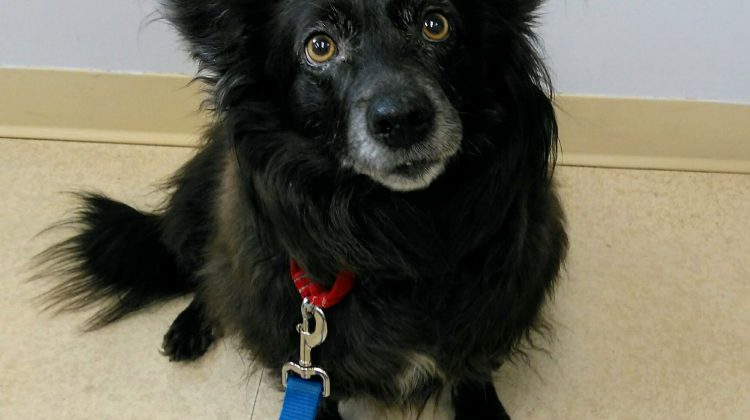 This sweet lady according to the Kamloops and District SPCA Branch was picked up by firefighters and a vet in the Riske Creek area near Williams Lake. -Photo: BC SPCA

SPCA Branches across the province continue their efforts in saving animals that may have been left behind.

Animal care supervisor Sarah Steeves is with the Quesnel and District SPCA.

“Our special care provincial constables are actually going back into the evacuation sites and catching the animals. So if they had to leave their animals behind we definitely recommend calling the call centre so our constables can go back in and hopefully take the animals out.”

“The community support has been amazing for deployed BC SPCA staff and volunteers,” said BC SPCA general manager of community relations Lorie Chortyk. “In every area, locals have donated space in their homes, or room in their yards for a camp – their generosity is truly inspiring and we are so grateful.”

While officers are dealing with mostly dogs, cats and horses, they have also worked to rescue pigs, llamas, mules, a cockatiel and even a six-foot red tail python.

“We were able to reunite Medusa (the python) with her guardian at a checkpoint,” says BC SPCA senior animal protection officer Kent Kokoska. “He was very happy to see her again.”

The Williams Lake and District SPCA had closed on July 8 according to their Facebook page. Steeves says they had received all 62 animals from the Branch-6 dogs, 1 rabbit, and the rest all cats and kittens through their Drives Through Lives transfer person who is based in 100 Mile House and was able to get through the road closures through permits.

She says they are currently not accepting any cats or kittens at the Quesnel Branch as it is under quarantine until at least July 23 because some of the kittens from Williams Lake had ended up with a virus, and recommends that anyone who finds a cat to let them know and to feed it until they’re open again.