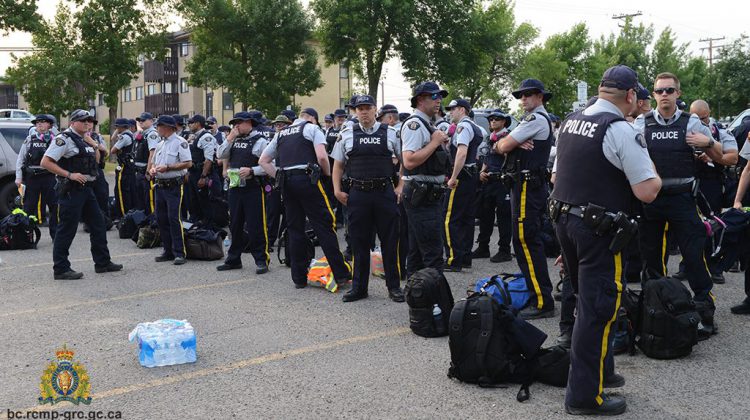 Additional members of the Canadian Armed Forces have been employed from Alberta to Williams Lake to assist RCMP.

Rear-Admiral Art McDonald is the Commander of the Joint Task Force Pacific which is the Canadian Armed Forces tasked with domestic military operations in BC.

“Today the Candian Armed Forces has approximately 225 Canadian army soldiers completing a road move from Edmonton-Garrison to Williams Lake from where they will initially operate in contributing to the ongoing province led response to the wildfires.”

“The deployed will operate as the Joint Task Force Pacific Land Task Force which will be born of 60 some vehicles of various types including 10 light armored vehicles which are uniquely situated to working in difficult conditions.”

McDonald says the goal of the task force is to free up RCMP personnel for core policing functions and law enforcement duties.

He says they will assist RCMP in providing information to the public, the ground evacuation of persons in distress, delivery of essential aid by land and by air, and to help RCMP maintain road checkpoints throughout the areas affected by the fires. He adds they will not be conducting law enforcement activities and will not be armed.

The request which was approved Thursday for Canadian Armed Forces Personel to assist emergency efforts in the Williams Lake area was at the request of the Commanding Officer of the BC RCMP.

Assistant Commissioner in Charge of Core Policing Eric Stubbs says over the course of the last two weeks that more than 500 additional police resources were deployed throughout the province in affected areas.

“As the wildfire situation continues to evolve, the RCMP and our partner agencies are planning for the long-term sustainability of core policing duties in the province while maintaining our ability to have a timely response to emerging fire issues,” said Deputy Commissioner Brenda Butterworth-Carr, commanding officer of the BC RCMP. “The RCMP will continue to have a robust presence within evacuated and affected areas, while also overseeing the specific duties assigned to the Canadian Armed Forces.”

Approximately 150 CAF personnel have been deployed to Williams Lake and the surrounding area to support emergency management efforts. The additional 225 announced today brings it to a total of 375 CAF personnel deployed.

“The Canadian Armed Forces are part of the larger Government of Canada safety and security family. Like family, we help out when and where we are needed. We are proud to support our RCMP colleagues, and all of our federal and provincial partners, engaged in keeping Canadians safe during this time,” said McDonald.

(With Files from the Ministry of Public Safety and Solicitor General)