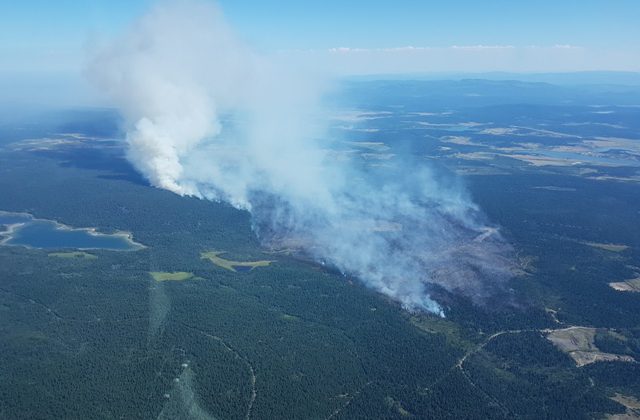 An aerial view of the Gustafson wildfire on July 7, 2017. -Photo: BC Wildfire Service

According to the BC Wildfire Service, the total number of wildfires has increased to 188, with 16 new ones starting on Wednesday.

Chief Fire Information Officer Kevin Skrepnek says the fires have burned more than 111,000 hectares of land since April 1st of this year.

“Now, that number is a significant jump, but again, it’s a result of a more accurate mapping of the size of these incidents, not necessarily because of that much growth.”

He says the weather conditions this weekend are forecasting a cold front, but it could bring gusty winds for the Northern Interior, Cariboo, and Southern BC regions.

“Winds have been a huge factor in terms of current fire activity over the last few weeks. So that’s definitely a cause for concern and, in turn, will be challenging for some of our efforts out there.”

Weather has offered a reprieve in the past few days. Hot dry conditions expected to continue long term.

More than $66 million has been spent in suppression efforts to battle the blazes.

Skrepnek says 3,100 fire personnel have been deployed, including almost 400 crew members from out of province, but Canadian military forces are still grounded in Kelowna until they’re given the green light.