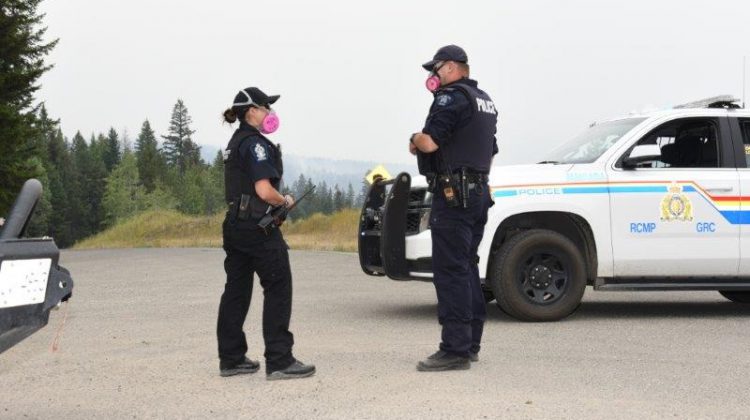 RCMP at a checkpoint. -Photo: BC RCMP

In addition to the extra fire crews that are coming in to assist with the wildfires in the Cariboo the RCMP are getting some more help of their own.

“Additional RCMP Officers have been deployed to a number of communities around the province including Williams Lake, Ashcroft, Cache Creek and 100 Mile House to assist with BC Fire Services Operations and to supplement core RCMP policing duties,” explains North District RCMP Corporal Madonna Saunderson.

On Friday evening, RCMP stood up their Division Emergency Operations Centre at BC RCMP Headquarters, as they do during major events and situations, such as natural disasters like fires.

“The numbers are changing regularly, but it would be safe to say that as of this morning (Tuesday) upwards of 300 additional members have been or will be deployed,” said Commanding Officer of RCMP in British Columbia Brenda Butterworth. “A large portion of the resources deployed at the moment are from specialized units such as the tactical troop and traffic services. Tactical troops are specialized units that are trained and equipped to deal with emergency situations and are essentially self-sufficient.”

Butterworth says other RCMP resources from outside the province have been identified to assist and that Alberta RCMP will have 40 resources on the ground in BC within the next few days.

“The officers deployed in those evacuated communities are patrolling around the clock to ensure you have a secure community to return home to as soon as it is safe to do so. The RCMP are doing what we can to prevent access to non-essential workers and services in those evacuated zones, and have personnel in place at checkpoints to ensure that access protocols are observed by in-coming vehicles.”

“We have arrested 10 individuals within 100 Mile House and Williams Lake for break and enter, breach and mischief. Most of whom are local individuals previous known to police,” Butterworth adds. She, like Saunderson, says criminal activity in any area will not be tolerated.