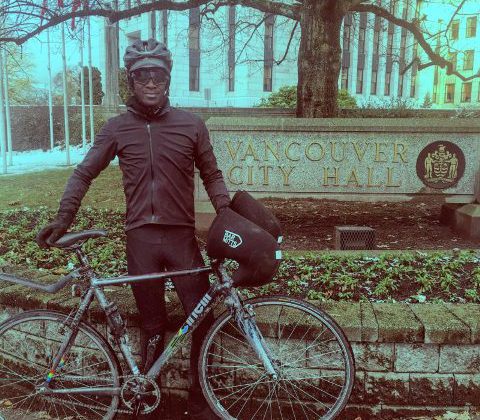 An image of JaBig who had reached Vancouver on December 10, 2016. -Image submitted

A Montrealer is continuing his big journey to set a Guinness world record for crossing Canada by fixed gear bicycle on a self-supported DJ tour.

Jean-Aimé Bigirimana, or perhaps better known as JaBig says although he didn’t even spend 24 hours in the Lake City after having departed it Wednesday morning, everyone had been very generous.

“When I first came, I saw the Tourism Centre and I wanted to because I needed a little bit of heat because I was getting slightly cold. And then I went in there and people welcomed me. I talked to everybody, and what I thought in my mind was going to be five minutes actually up being an hour.”

JaBig says he then went to the Co-op (Cariboo Growers) and Red Shreds where he had received the most support and they fixed his brakes free of charge.

He says he is currently on his way to Prince George and will have his 15,000km journey which he started in January 2016 complete when he reaches Tuktoyaktuk near the Arctic Ocean.