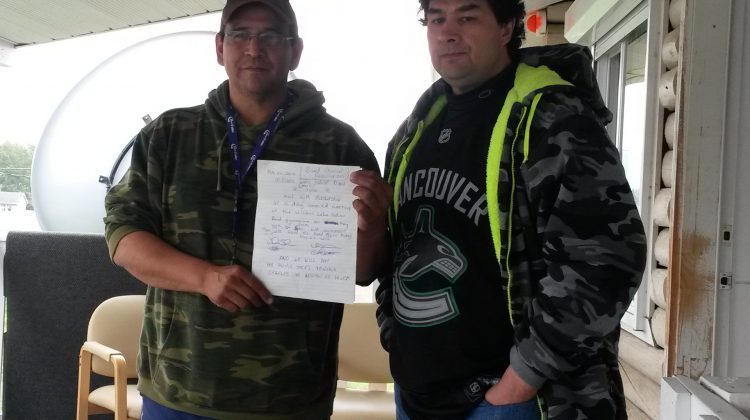 The occupation of the Williams Lake Band Administrative Office is over following an intense scene Thursday afternoon.

Arnie Jack and Darcy Kobelt were the last of the demonstrators who had forced their way into the building on Tuesday, to leave the premises at around 4 pm.

RCMP had been called to the scene when a pushing and shoving match ensued between the protesters and Band Councillors and Elders, who entered their own office.

After discussion between both sides in the building, Council agreed to hold a community meeting with membership on Monday as well as pay for the towing charges for one of the demonstrators, Arnie Jack’s truck.

Jack and Kobelt also signed an agreement that they would allow all Band members to speak freely without personal attacks at all future band and community meetings.

“We are going to honor the meeting,” says Acting Chief Heather Mackenzie. “It’s specifically for our Band membership.”

Up to 90% of the demonstrators according to Council were not from the community. They say the illegal protest economically and emotionally hurt the Band.

Elders and Council members noted however that the protesters were respectful of the building during the three-day occupation and that nothing was stolen or damaged.