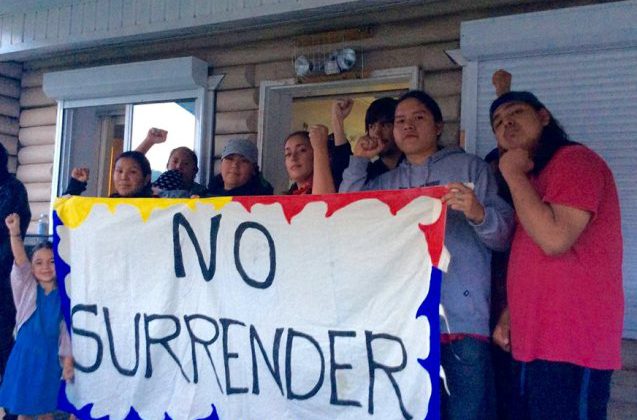 It’s now day three of the occupation of the Williams Lake Indian Band Office by demonstrators.

Recently joining the group was the Secwepemc Women’s Warrior Society, who have expressed support for outspoken Band Member April Thomas who was arrested for obstruction after allegedly breaking through a police cordoned area Tuesday.

“Each and every one of the Councillors of the Williams Lake Indian Band is either a manager or a coordinator and under those positions, they get to set their own wages. It’s like they’re taking everything for themselves and pushing the people further into poverty, meanwhile, they’re signing agreements like Mt. Polley.”

The demonstrators who are demanding to speak to Chief Anne Louie were addressed by Band Councillor Willie Sellars yesterday evening.

“The structure of the Indian Chief and Band Council system, created and enforced by the Federal Canadian colonial government allows for decisions to be made by the Chief and Council without the knowledge and consent of the People. This is unacceptable,” stated the Secwepmec Women’s Warrior Society.

“We will continue to occupy the Williams Lake Indian Band office until further notice.”

*UPDATE: The Demonstrators left the Administrative Building later in the day following discussion between them, and Band Council and Elders.*