Mountain Racer Statue To Be Restored 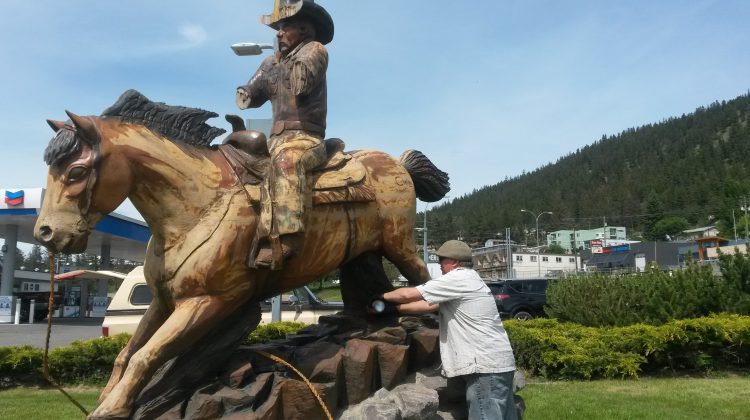 Thanks to a local artist the iconic Moutain Racer Statue in Williams Lake will look as good as new in about 2 weeks time.

Mayor Walt Cobb says he’s glad that the vandalized statue is being fixed.

“It’s unfortunate that we have to go to these extremes and continually repair some of the beautiful things that we have around our community, but it’s being repaired now and hopefully it won’t be vandalized again.”

Cobb says although has been some discussion on if the statues should be fenced, have lights on them, or even cameras to monitor any vandalism, he doesn’t know where it will go.

“Should they be fenced? Should there be some kind of protection around them? Should we put lights on them?-I don’t know if that would help, but maybe we should we put cameras on them so we that can monitor and see who is doing the vandalism? There are lots of options, but I don’t know where we’ll go. That will be determined later.”

Local artist Dwayne Davis along with his uncle were on site repairing and repainting the Mountain Racer Statue, which had the hands of the rider destroyed and parts of it’s hat, near Chevron on Tuesday morning.

“I’m going to strip the whole carving back down and after the arms are attached and part of the hat (by carver Ken Sheen), then I’ll actually come back and paint it all up.”

“All the artwork around here is important,” Davis adds. “I think it gives us our identity.”